How To: Unassigned tasks in Teamleader

When creating a task in Teamleader you can assign it to yourself, a colleague, a team or to no one in particular. This last option of 'unassigned tasks' will be discussed here.

Unassigned tasks are especially convenient when you want to create some (general) tasks without having to decide already who will pick them up later. Later on, the assignee can be changed to a colleague or a team.

Everyone will have access to these unassigned tasks when navigating to the tasks menu, but they won't appear on anyone's dashboard since they aren't specifically assigned to someone.

When you navigate to Calendar > Tasks you'll find a smart segment here to easily guide you to the unassigned tasks: 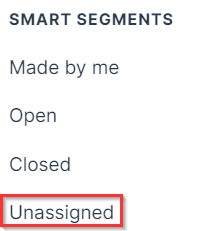 It's also possible to include unassigned tasks in segments you create yourself.

Important is that unassigned tasks can’t be repeated. This because recurring tasks are immediately planned in the agenda and we can't do this without an assignee. First assign this task to a colleague to make it recurring.

When deleting a team in Teamleader:

As you might know, it's possible to create a project template if you often use the same structure for your projects. If you choose to include tasks per milestone in your template, you can keep these unassigned. This is especially useful when you have general milestones and general tasks and you want to assign them to your colleagues later, after the project has been created.

Send feedback
Sorry we couldn't be helpful. Help us improve this article with your feedback.
Modified on: Mon, 27 Jan, 2020 at 3:55 PM